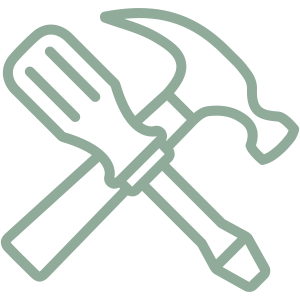 Berggren Architects completed an addition to the historic courthouse. 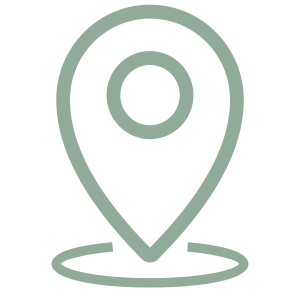 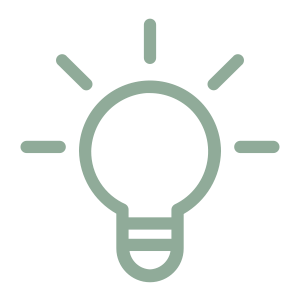 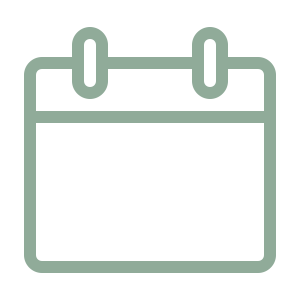 This project was completed in 2019.

Though the Saline County Courthouse was the ultimate in modern design when it was constructed in 1927, it had become deficient regarding compliance with the 1990 Americans with Disabilities Act (ADA) and current fire code requirements. Issues arising from space deficiency were also apparent, such as the lack of waiting areas and lack of separation between the general public and detainees on court session days. The growth of many county offices that are already at capacity only added to the issue.

The public’s double-doors to the district courtroom had the inner acoustical doors removed to comply with exit requirements.

After extensive staff interviews and review of available documents, Berggren Architects identified the primary needs of addressing security concerns and the preferred adjacencies of administrative, judicial, service, and support spaces. A main feature of the addition is a new elevator with both south and west doors. One secured elevator door allows for access to private spaces—those meant for detainees and court staff—which were designed to otherwise be secluded from public spaces. This satisfies the Nebraska Supreme Court’s standards for public safety and the preservation of dignity for detainees.

The $7.3 million, five-story Saline County Courthouse addition was completed in 2019. A main feature is a new elevator with both south and west doors. One secured elevator door allows for access to private spaces—those meant for detainees and court staff—which were designed to otherwise be secluded from public spaces. Other spaces include a new county courtroom, secured point of entry, a sally port providing a separate entrance for detainees, new fire separation for existing stairs, and an Emergency Management Center located in the basement designed to withstand an F5 tornado.

The side elevation of the addition carries the same architectural details as the original courthouse.

The northeast corner of the courthouse addition at sunset. 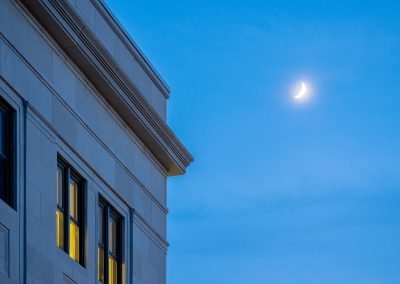 Moonrise over the Saline County Courthouse. 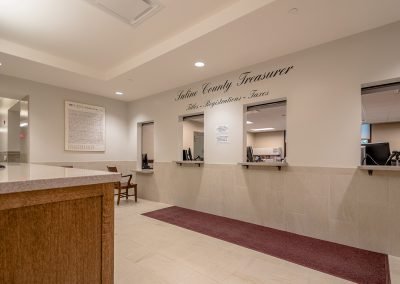 The new waiting area for the Saline County Treasurer’s office 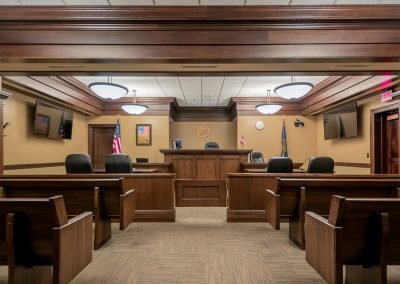 The new county courtroom features controlled access for detainees and secure passage for the judge and other court personnel. 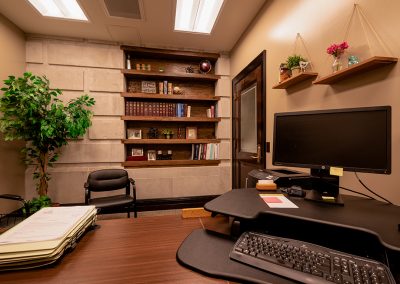 The new judge’s chamber features shelving built into a former window opening in the exterior limestone of the original courthouse. 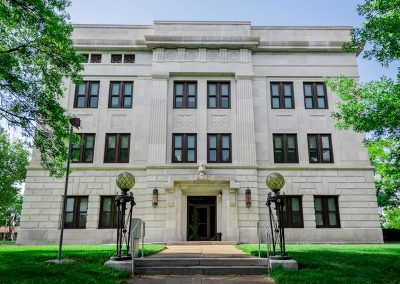 Historic side entrance on the south face of the courthouse. 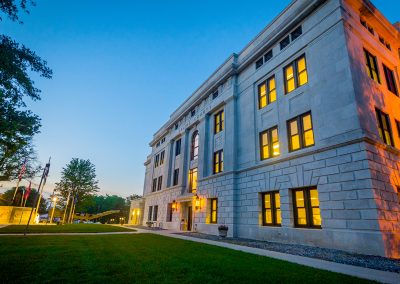 The Veteran’s Memorial, another Berggren Architects project, is visible from the southwest corner of the courthouse. 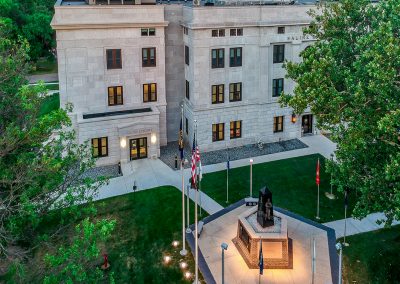 A drone captures the Saline County Veteran’s Memorial, aligned with the entrance to the courthouse addition. 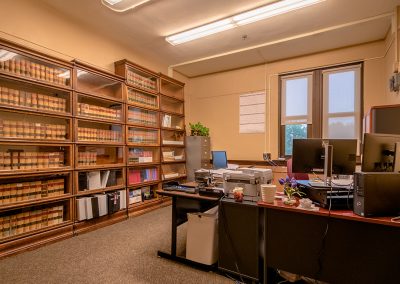 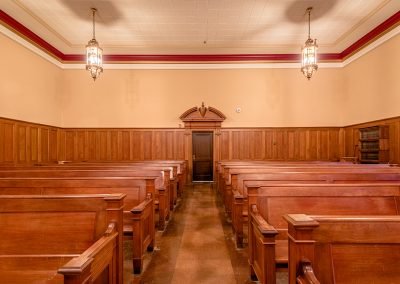 The rear door to the district courtroom was relocated from the west wall (on the left) to be center on the gallery aisle, providing access from the new addition’s courtroom waiting area. 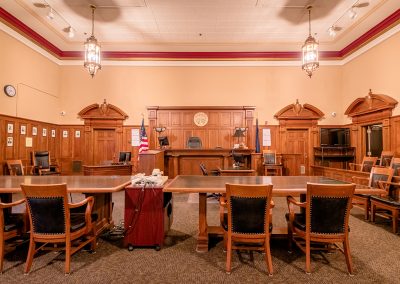 Front of the district courtroom. 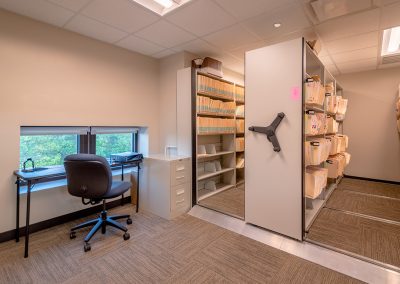 Adjustable shelving was installed for the new county attorney’s office on the fourth floor of the addition. 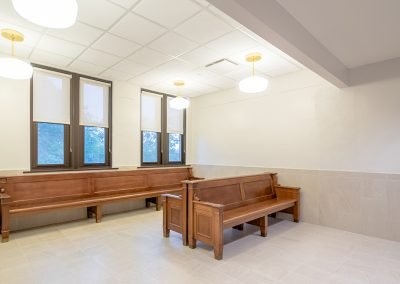 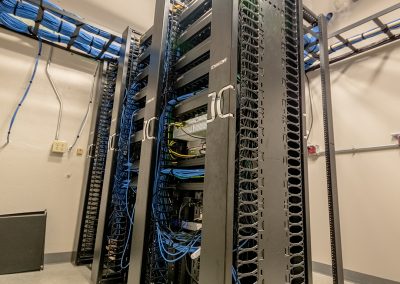 The server room is equipped with a dry-chemical fire suppression system. 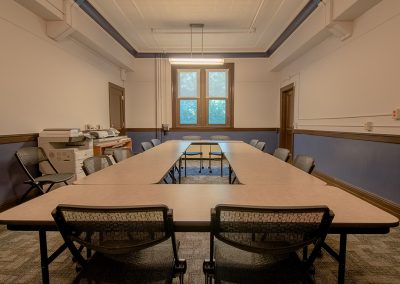 The former mailroom, adjacent to the County Clerk’s office, has been converted to a conference room. 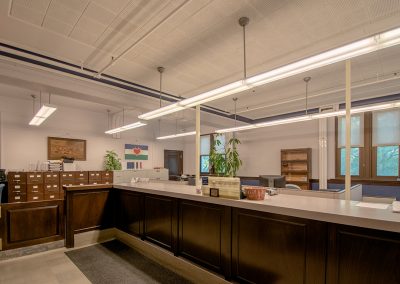 The county clerk’s office on the second floor was expanded by removing a wall that had separated the office from a storage room. 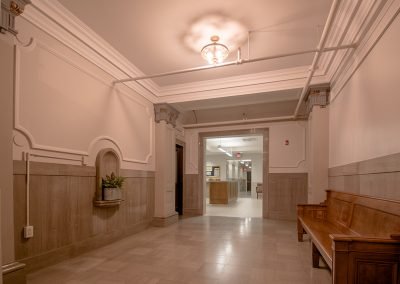 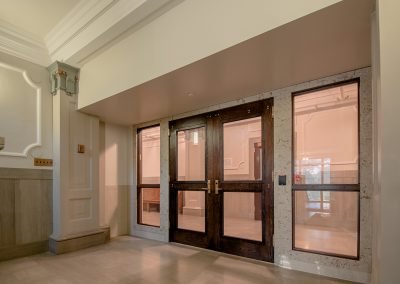 A new corridor door was added to the second floor for fire separation and security. 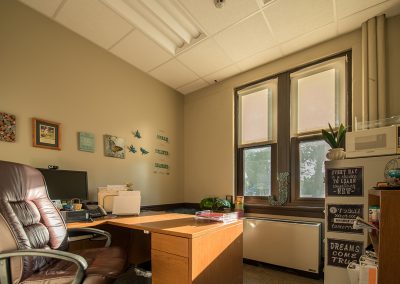 A new probation office on the first floor of the original courthouse. 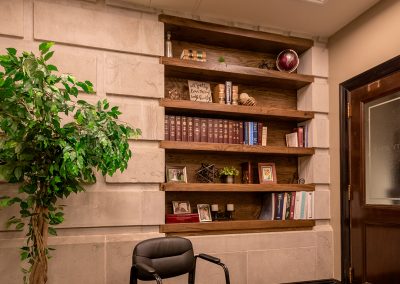 The judge’s chamber was designed with the original courthouse exterior exposed. A window opening was utilized to create a built-in bookshelf. 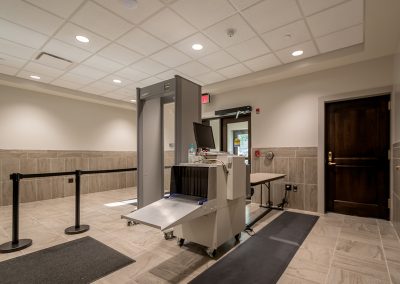 Security screening at the west entrance to the new addition. 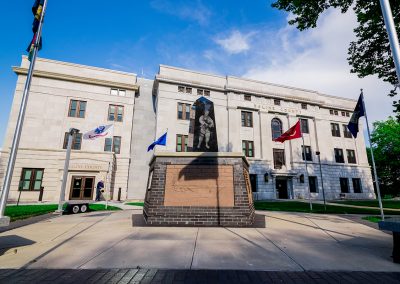 The Saline County Veteran’s Memorial was designed by local students and actualized by Berggren Architects.

A natural niche for our firm has been county courthouses for almost 40 years. We provide the expertise needed to navigate the process of caring for these important historic structures.

Our team has experience in navigating the multitude of entities involved in preserving the historic integrity of the building while also providing for modern day needs and requirements.

Buffalo Bill Center of the West

Museum of the Rockies

Museum of the Mountain Man 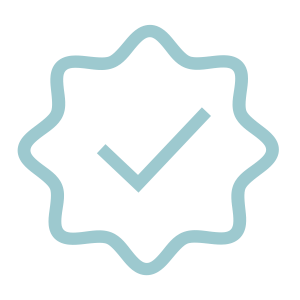 We listen to you

We are preservation architects, let’s get together and talk about your project. Once we know your ideas, we can start your project in the right directions.

We involve you in the planning

Planning projects is what we do. We’ll work with you to develop the best way to implement your ideas. Our written documents are the road map which is essential to ensuring your expectations.

We make it happen

When you’re ready to implement your ideas, we’ll gather together the craftsmen and women necessary and bring your ideas to life. Architecture is in the details. We will follow your project through completion ensuring all the details meet your expectations.
Contact Us

We offer consulting services to both general clients and professional clients in sharing our knowledge and expertise in the area of historic preservation. Our master planning and preservation planning prepares our clients to be better able to plan for the life of their historic structures and districts.

We know the meaning of sustainability because of our in-depth work with structures which have stood the test of time. We offer sustainable and green new construction which is historically sympathetic, including in the form of additions.

In 1977, Jerry Berggren founded what would become Berggren Architects, P.C. The firm began as a sole proprietorship in Lincoln, Nebraska and has since then been dedicated to the preservation of Nebraska’s finest architecture. The 1983 Jobs Bill was the milestone which introduced the firm to its most significant building type, the historic county courthouse. A project to improve the thermal efficiency of the windows at the Johnson County Courthouse in Tecumseh also initiated Berggren’s concern for energy conservation and an ongoing commitment to sustainable design.

In 1986, Jerry’s “Courthouse Trail” proposal to the state was approved. The Courthouse Trail experience solidified two career-long relationships with the Nebraska Energy Office and the Nebraska Association of County Officials. He continued to serve Nebraska’s county clients and in 2002 he became the recipient of the Honors Award from the National Trust for Historic Preservation. This achievement was Berggren’s first nationally recognized award.

Today, Jerry Berggren has expanded his firm and employs professionals with abilities in historic preservation, architecture, interior design, sustainability, master planning and more. The future will undoubtedly hold more unexpected opportunities and challenges. He looks forward to each of those and you are invited to contact him directly regarding the architectural challenges you face.

Garry has been working in the architectural field continuously since obtaining a master’s degree in architecture from the University of Nebraska-Lincoln in 1991. He had previously worked with Jerry Berggren as an intern in 1989 and the experience piqued his interest in the field of preservation. Garry leads the production team at Berggren Architects, P.C.

Farheen, a citizen of India, began her career with formal education in that county achieving the status of architect. When her husband was transferred to the US, she seized the opportunity to study at the University of Nebraska – Lincoln graduating in 2019 with her Master of Architecture. She immediately became one of our full time employees continuing to work until her student visa expired in July of 2020. Having to return to India, we thought we had lost a valued employee. Thanks to COVID, we have had to learn to work remotely. From India, Farheen is once again joining us. This time as a contract employee and we are very grateful to have her back

Janet has a career history as an educator, writer, and researcher in the field of historical and architectural preservation. She currently works as the College Historian for Doane College in Crete, NE and is the Curator for the Crete Heritage Society. Janet is currently employed as the firm’s Architectural/Preservation Historian.

Morgan Davis joined Berggren Architects in 2018. As an architectural intern, Morgan’s love for historic architecture has influenced her desire to understand the importance of a building’s life span. Her passion for creating environmentally sustainable designs has made her an asset to our team. Morgan is working remotely as she pursues a Masters of Architecture at the University of Michigan. She currently holds a Bachelor’s of Science in Design, Architecture from the University of Nebraska-Lincoln.

Brandy Nguyen joined Berggren Architects. in April of 2020. As an architectural student, Brandy was recruited in 2020 to become the next Larsen Legacy intern. During this year of his internship, he is taking charge of the firm’s outward appearance. Website development and polishing the proposal we submit are among his responsibilities. He is also becoming a significant help with the production of construction documents.

Alexi joined Berggren Architects in 2021. In her first year as a Larsen Legacy intern, her responsibilities began with coordinating office operations and research. Her current responsibilities include marketing and preparation of construction documents and design.